On The Saunter: The Anglo Zulu Battlefields

Many know of the Anglo Zulu War through school history or the film Zulu. It is a fascinating period. In one battle, Rorke’s Drift, more medals were issued by the British for valour than in any other battle and, of course in the famous battle of Isandlwana,  the mighty British red coats were defeated by a sea of Zulu Impi.

The Saunter is very proud to include the Battlefields and one of South Africa’s top wildlife conservation artists, Christine Lamberth whose studio is at Rorke’s Drift. Christine is a conservation artist and her focus is on engaging the viewer to see the animal and become aware of its nature and vulnerability in our fast changing landscape with dwindling wildlife numbers.

Overlooking  the Isandlwana battlefield is a stunning lodge, Fugitives’ Drift. It was established by David Rattray and his wife Nicky. David Rattray was the only speaker at the Royal Geographical Society in London who attracted a queue around the block. At his memorial, Mangosuthu Buthelezi wryly told of David’s entry on a Tax Form under Occupation, as “Story Teller”. His incredible story telling ability has been passed onto his 2 sons who have become fantastic guides and will bring the battles alive for you. 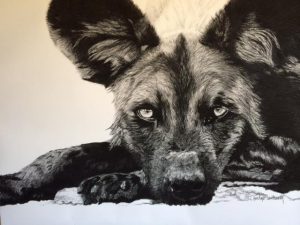 The vivid and arresting wildlife art of Christine Lamberth. She captures the real animal. https://www.thesaunter.co.za/listing/christine-lamberth-wildlife-artist/

Find out more about the Fugitives’ Drift Battlefield Tours at  https://www.thesaunter.co.za/listing/fugitives-drift-battlefield-tours/